DO NOT FEED THE ANIMALS

It always kills me a little inside when I see posts about people on food assistance. The posts generally make fun of these people and plays into the stereotype that people participating in the food assistance program are taking advantage of “free money”. They are lazy, unemployed nobodies taking from all of us; living high off the hog on the taxes we pay.

Well, let me tell you why these posts kill me.

These Facebook post probably wouldn’t bother me as much if I had never been a Foster parent. I know first-hand the stories these children tell of missing meals. Of eating crackers and ketchup for supper when the benefits ran out. I’m not saying there aren’t people who find a way to take advantage of any situation. I’m just saying, if you’re going to be upset at where your tax dollars are going, here is a few situations we should be outraged about: 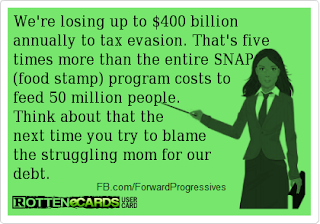 There is so much waste, I could fill an epic tome, but I won’t. If it makes you feel better to mock the poor, then so be it, just don’t pretend it's because you really care about how your government spends your tax dollars. If that were the case, I'd see posts about governmental fiscal waste instead of a meme about poor people.

We all know that poor children and their families hold all the power in the world… which is why we blame all our woes on people on “food stamps”.

Posted by MARISSA PEDROZA at 1:11 AM